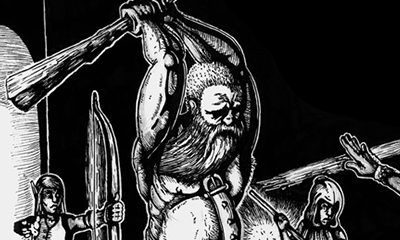 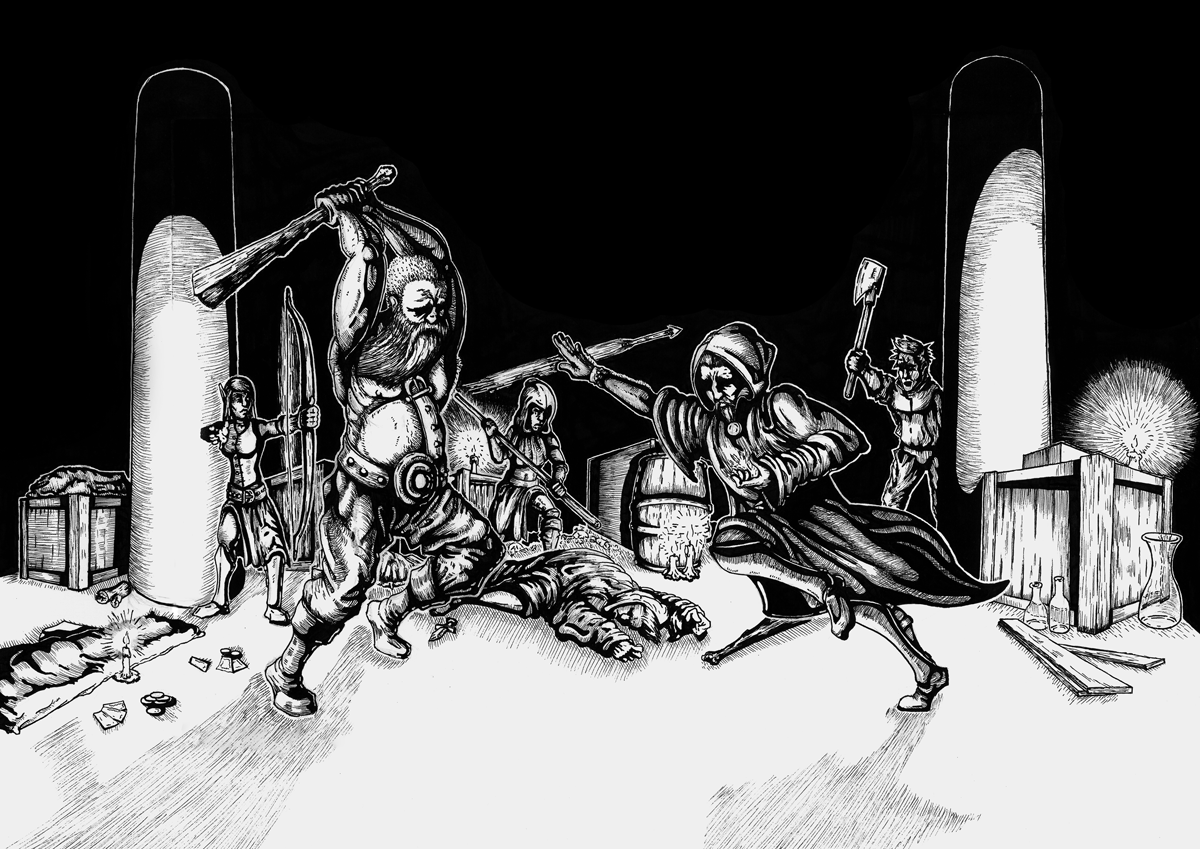 When we last saw the group – consisting of Kastan, Nimui, Leia and Ribs, son of a butcher – they had just finished their first battle. They were investigating a crypt near the village of Darkmouth and came upon three robed men within the first chamber. They defeated two of them but the third managed to escape into the next room. The group is now taking the opportunity to inspect their environment and ready themselves to venture forth.

Kastan, a dabbler in cryptography, took the time to try and decipher some of the markings that covered the walls while Nimui tended to the wounds of the others. The markings proved to be somewhat beyond his skill but he did note that they were made some time after the crypt fell out of use by the locals as they did not seem to match any religion he knew to be practiced in these parts. The elements that stood out most were of strange marine monsters seemingly being worshipped by throngs of human and inhuman figures. A symbol consisting of a tentacled starfish with a large eye in the middle was repeated on almost every surface. Kastan gave up on the markings and went about searching the room for any useful or valuable items that the robed men might have hidden. He found some gold coins and a dagger hidden amongst the litter.

Nimui, after patching and healing what she could, set about searching the bodies of their slain foes. They had on them some coin and their weapons, but not much else. With the room now fully searched and everyone as patched up as they were going to get, it was time to decide on a strategy. Ribs, son of a butcher, proposed they kick the door down and slaughter all that still move. The others, remembering Ribs’ previous attempt at door-down-kicking, were not so keen and Kastan suggested a more stealthy tactic. “We should sneak in and see if we can surprise whoever is in there,” said Kastan. Nimui, unconvinced, said “Whoever is behind that door will be expecting us. Perhaps we should dress ourselves in the dead ones’ robes and, if there are more beyond the door, catch them off guard.” Leia and Kastan agreed to this while Ribs, son of a butcher, seemed disappointed that he would not have a second chance to prove his door smashing prowess. In the end, it was decided that Nimui and Kastan would don the robes and enter the next room while the others stay behind. Being the most skilled of the four in both stealth and charisma, Nimui and Kastan would enter and, if they found more foes, would try to bluff them into letting their guard down. At the right moment, they would signal the other two to enter.

Clad in the robes and with their weapons hidden, Kastan and Nimui carefully opened the door and entered the room. It took a moment for their eyes to grow accustomed to the new, lower light. “Stop!”, someone shouted from the darkness. “Who goes there?”

“We just came back from patrol and found bodies in the next room,” said Nimui. “What happened?”

By now their eyes have adjusted. They saw a robed figure, probably the one who had addressed them, standing behind a large table of alchemy tools while another wielding a large club and standing nearer to the center of the room. In the corner of his eye, Kastan saw another figure peering from behind a large pillar to his left. In the low light, he could just make out wisps of smoke still rising from the figure’s scorched hair and flesh.

(At this point a dice roll is done to see if, based on Nimui’s charisma vs. the cultist’s perception, the bluff is successful. It was not.)

Before the figure behind the table could respond the still smouldering figure pointed a shaking finger at the two and shouted, “They lie! It was them, do not be deceived! They cut the others down and set me aflame!”

In response, the figure near the center of the room took cover behind the nearest pillar. The one who first addressed the pair flipped the table over, sending bottles and alchemical ingredients flying in the process. A ball of fire flew from his hand, flashed past Nimui’s head and exploded against the wall behind them. Nimui grabbed her staff and made for the club wielder, skirting along the wall for cover from the spell caster. Kastan, loath to leave a job undone, drew his axe and made for the trembling figure cowering behind the leftmost pillar. Leia and Ribs, upon hearing the commotion, came rushing in with their weapons drawn. Ribs, son of a butcher, ran straight for the spell caster, swinging his mighty club and roaring as he went. About halfway across the room, a fireball struck him full in the face and promptly halted both his momentum and his roar. Batting out his remaining flaming hair, Ribs rolled behind the nearest cover he could find. In the meantime, Leia had positioned herself just inside the door and was trying to get a clear shot of the caster. With Ribs, son of a butcher, finally out of the way she had a clear shot and took it. The arrow struck the mage’s shoulder and almost went clear through. The mage, staggered by the force of the close-range shot, screamed and ducked behind the table. Kastan, seeing all this, decided that the mage proved a much greater threat than the burned man cowering by the pillar and changed course to engage the mage. Nimui and her target were both still behind cover and waiting for an opportunity to strike. The mage had, with healing magic, removed the arrow and sealed his wound and rose to fling more fireballs just as Kastan reached the table. Kastan swung his axe at the surprised mage’s exposed head. His blade struck the mage’s neck and took his head clean off. The mage’s head fell with a thud at Kastan’s feet as his body slumped back behind the table. As he looked up, Kastan saw the burned man with his club raised above his head standing over Ribs who was too busy putting out the flames on his face to notice. Without thinking, Kastan, possibly drawing on his years of playing ball in the streets with the other street urchins, kicked the head of the mage. The head flew through the air trailing blood and hair and struck the burned man full in the chest. The club flew from the burned man’s hands and he fell back clutching his comrade’s head, horror twisting his burned face.

Kastan ran toward the burned man who just lay there frozen in horror and grabbed him. The man went limp as Kastan dragged him and threw him into a corner. Ribs had finally rid himself of the last of the flames and realized what had just happened. Enraged, Ribs, son of a butcher, charged once again. This time his target was the horror-stricken figure in the corner of the room. Kastan saw Ribs’ intentions and placed himself in his way. “Don’t kill him!” he said as Ribs came to a halt in front of him, “We can interrogate him.” Ribs, son of a butcher, with a grunt of disappointed agreement, lowered his club. Nimui, seeing that the spellcaster had been dealt with, had in the meantime tried to surprise the club wielder who was still hiding from Leia and her bow. She had dealt the man a glancing blow with her staff and they were now struggling fiercely in the center of the room. Leia tried to get a shot in with her bow but the two moved around so much that she might just as easily hit Nimui. Kastan saw all this and told Ribs, son of a butcher, to watch the prisoner as he tried to aid Nimui. Taking out his own bow he nocked an arrow. Seeing that he had a clear shot, he loosed his arrow. It flopped out of his grip, flew in a lazy arch and fell clattering just a few feet away.

(Rozier, the player who controls Kastan, still had an action left. He could not think of anything to use it on and had no potions or useful items on him. Not wanting to waste an action, he decided to use it in quite an unconventional way.)

Disappointed at his failure, Kastan farted in frustration.

(At this point the DM did a die roll with Kastan’s constitution points to check for fart potency. It was a critical hit. Everyone within a certain distance from Kastan had to do a constitution check to determine their resistance to the foul air. Ribs was closest and failed the check.)

Kastan’s street cuisine hardened bowels produced a fart with matching potency. So potent was it that it overwhelmed Ribs, son of a butcher, who had spent most his life around meat of various stages of rottenness. Ribs’ stomach turned around inside of him and he became sick. Unfortunately for the poor prisoner, Ribs was standing over him at the time. Witnessing the death of his comrades, being set aflame, having the wind knocked out of him by the decapitated head of another comrade, bearing witness to the vilest fart in human memory and being puked on by a club-wielding savage proved too much for the poor cultist and he subsequently died of shock.

Leia, who was miraculously unaffected by the chemical attack, loosed another arrow and managed to wound the last remaining man. This left an opening for Nimui to land a blow with her staff. A sickening crack was heard through the room as the man’s skull fractured. He went immediately limp and was dead before he hit the floor.

With the immediate danger finally past the group could once more take the time to tend to their wounds and explore. The only items they found that are worth mentioning were two unlabeled potions that had survived the table being flipped over. Nimui used her knowledge of herbs and alchemy to identify them as a common health potion and a less common bottled fire. The latter potion takes quite a bit of skill and daring to make. Once it is made and successfully bottled the potion is extremely volatile and will combust in a fiery explosion if thrown with enough force to shatter the glass. The volatility of the potion depends on the skill of the alchemist and some may be more sensitive than others. Some of these potions have even been known to explode for no reason at all. With this knowledge, Nimui felt perfectly safe carrying it around in her pack.

With the immediate danger finally past the group could once more take the time to tend to their wounds and explore. The only items they found that are worth mentioning were two unlabeled potions that had survived the table being flipped over. Nimui used her knowledge of herbs and alchemy to identify them as a common health potion and a less common bottled fire. The latter potion takes quite a bit of skill and daring to make. Once it is made and successfully bottled the potion is extremely volatile and will combust in a fiery explosion if thrown with enough force to shatter the glass. The volatility of the potion depends on the skill of the alchemist and some may be more sensitive than others. Some of these potions have even been known to explode for no reason at all. With this knowledge, Nimui felt perfectly safe carrying it around in her pack.

Next up: The Crypt part 3

1 thought on “D&D – Temple of the Serpent part 3: The Crypt some more”